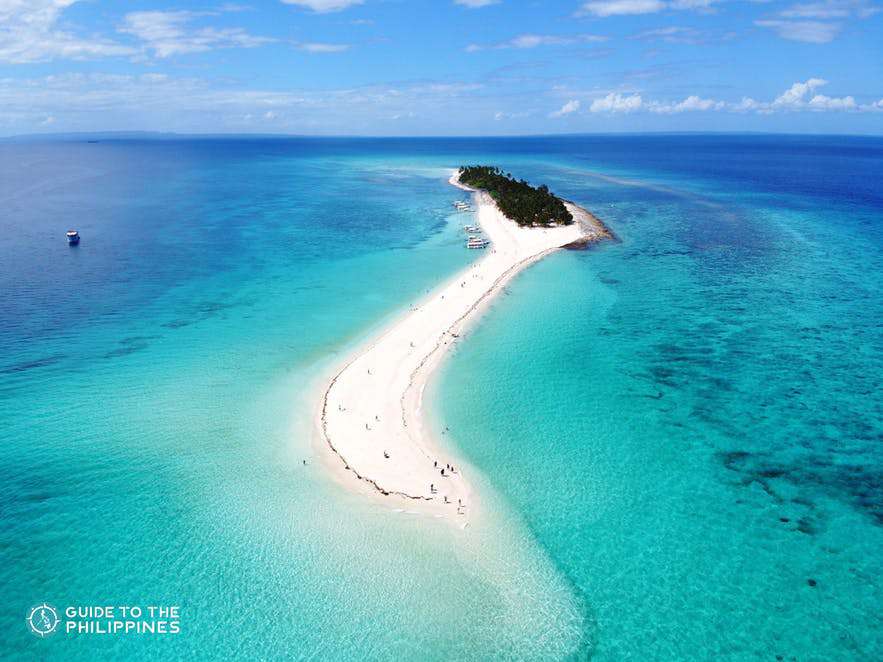 Apo Island Marine Reserve is one of the most successful marine sanctuaries established in the Philippines. Reef hooks and gloves are not allowed and night diving is unfortunately not permitted. The order of dives will be based on the currents and conditions of the day choosing from Coconut Point An often fast-paced drift brings divers over the sloping coral reef wall. Along the way, giant trevally, blackfin barracuda, big schools of big-eyed trevally, and plenty of sea snakes can be encountered.

Just beyond the chapel opposite the marine park warden’s office, Rocky Point West offers some of the most stunning hard corals to be found in the region with endless patches of leather corals on the top. The steep reef walls support numerous colourful reef species including pyramid butterflyfish and red-toothed triggerfish in their hundreds, frogfish, cuttlefish, banded sea snakes and hawksbill turtles are amongst the common sightings.

The colourful bottom divided by sand channels is the place to find a big school of big-eyed trevally, huge brown marbled groupers and sea snakes.

Negros Dauin, with its black volcanic sand, is famous for muck diving. Depending on the season, different types and sizes of octopuses, sea horses, (baby) frogfish, a variety of ghost pipefish, and flamboyant cuttlefish can be found.

Between 25-30m (80-100ft), car parts forming an artificial reef attract porcelain crabs and different kinds of shrimps amongst the many weird and wonderful creatures found at this site. Secret Corner This sand and pebble dive site is the perfect habitat for the smallest, weird and unexpected creatures such as cockatoo wasp fish, short-fin lionfish, and snake and garden eels.

A mix of black volcanic sand and coral boulders with soft corals. Due to the currents, all fish are very active which makes this dive very lively and exciting ending in an area with hot sand at the bottom, hence the name Mainit meaning ‘hot’.

A relatively shallow dive site with sandy slopes and seagrass beds, San Miguel is another critter wonderland! This is the place to find all your favorites including a variety of nudibranchs, ghost pipefish, tiny juvenile frogfish, and even the possibility of finding Pygmy Squid.

The small island of Balicasag, just off the tip of Panglao, is characterised by its many turtles, coral gardens, and steep walls which provide overhangs, cracks & crevices in which to search for a variety of marine species. This area has become a marine protected area since July 2017 and allows two dives per day only with valid permits.

The main attraction of this beautiful dive site is the green sea and hawksbill turtles in the shallow waters. The reef top edge is a nice habitat for schools of colourful damsels and anthias and when lucky also for giant frogfish.

Once famed for its black coral, this is where we encounter schools of jacks, long-jawed mackerels, red-tooth triggerfish, and different kinds of fusiliers.

There are several interesting walls and coral garden dives around the island of Cabilao and we choose from the following: Gorgonian Wall Provides a gentle drift along a fantastic coral reef with schooling fish and plenty of macro life in the shallow water, including the possibility of spotting a Denise’s pygmy seahorse.

Sloping walls full of sponges and gorgonian fans. This is a great place to dive with large green turtles. Also being seen are giant frogfish which can be spotted resting on sponges and numerous cowries hiding amidst the stunning hard coral garden.

A beautiful wall with gorgonians where bubble coral shrimps and orangutan crabs can be found in the bubble corals. The shallow grassy garden with its elephant ear sponges and barrel sponges is a perfect spot for wide-angle photography.

Situated in the Visayan Sea north of Cebu; Malapascua became known in the early 1990s as a dive destination. Prior to this, the island was known for its wide white sand beach, known as Bounty Beach; it has also become known for its beautiful coral gardens, coral walls and excellent local dive spots, as well as further-out sites including Gato Island, Monad Shoal, and Kemod Shoal. Monad Shoal is an underwater plateau where thresher sharks and manta rays can regularly be sighted.

The number-one dive site of Malapascua is Monad Shoal, a natural cleaning station for fish located 7.8 kilometres (4.8 mi) from the island . The shoal is a 1.5 kilometres (0.93 mi) long rock stump at the edge of a 200 metres (660 ft) drop and has a flat top at a depth of 20 to 24 metres (66 to 79 ft). The site is best known as the only place in the world where thresher sharks can be seen regularly at and just before sunrise. They use the seamount as a cleaning station for bluestreak and moon cleaner wrasse to remove ectoparasites such as gnathiids from their skin and clean their gills and mouths. The shoal also attracts other pelagic fish such as devil rays and eagle rays. Manta rays and hammerheads are seasonal. 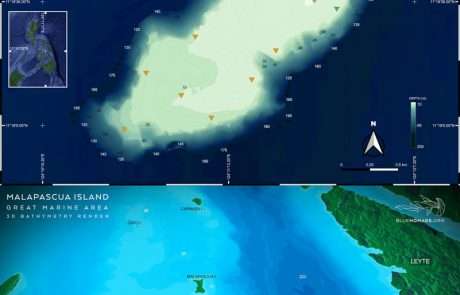 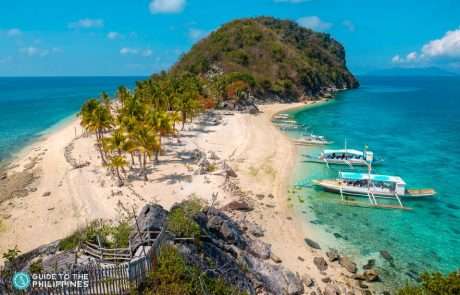 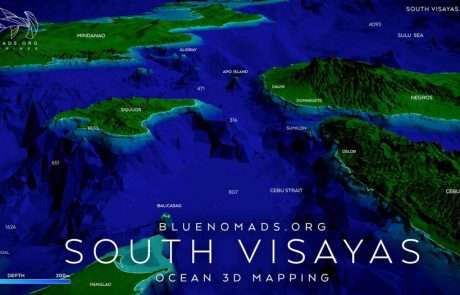 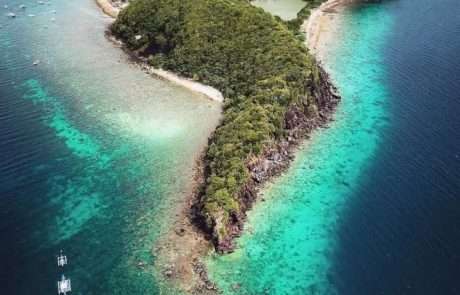 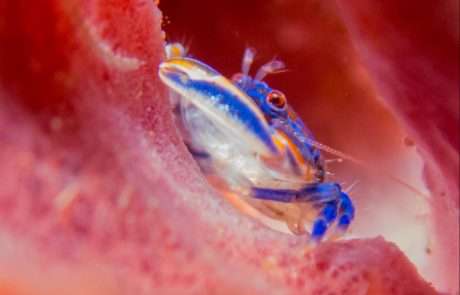 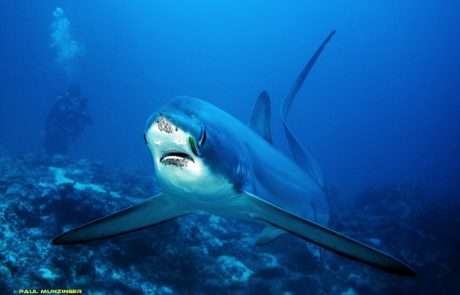 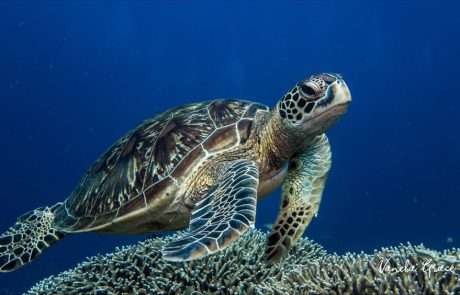 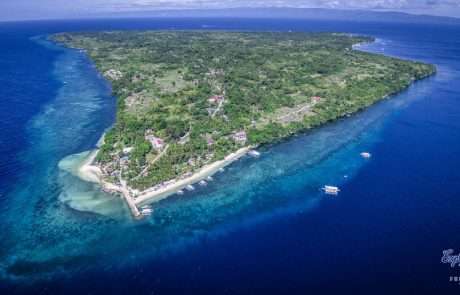 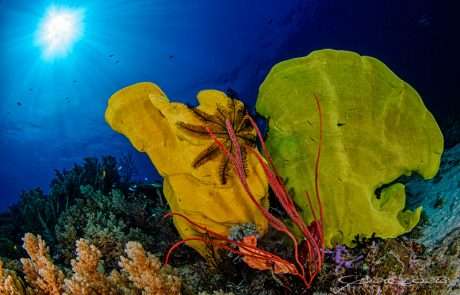 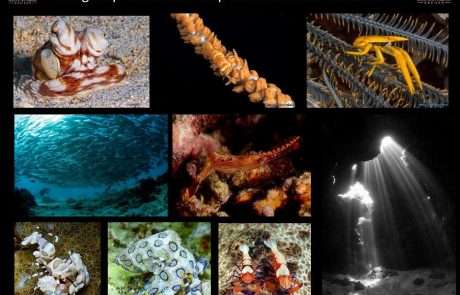 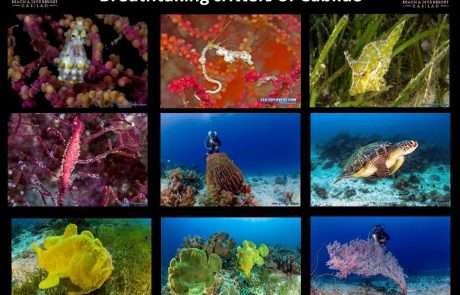 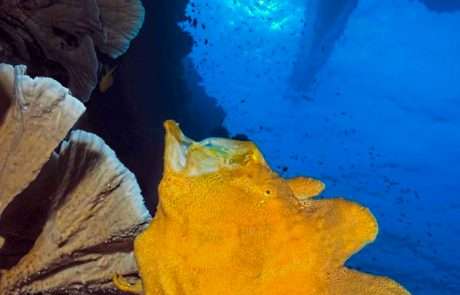 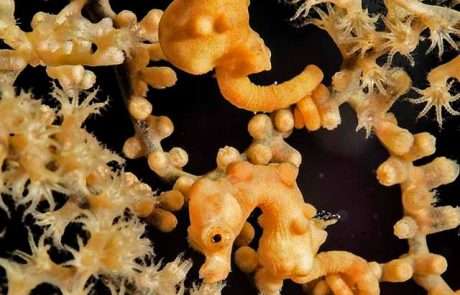 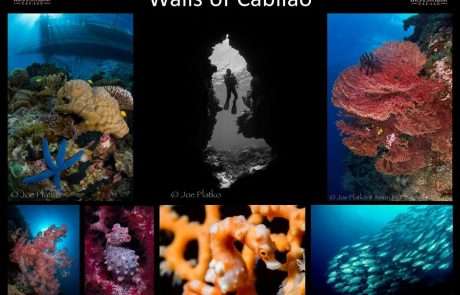 Camiguin is an island province in the Philippines located in the Bohol Sea, about 10 kilometres (6.2 mi) off the northern coast of Mindanao. It is geographically part of Region X, the Northern Mindanao Region of the country and formerly a part of Misamis Oriental province.

Camiguin is the second-smallest province in the country in both population and land area after Batanes. The provincial capital is Mambajao, which is also the province’s largest municipality in both area and population.

The province is famous for its sweet lanzones, to which its annual Lanzones Festival is dedicated and celebrated every third weekend of October. It is home to lush interior forest reserves, collectively known as the Mount Hibok-Hibok Protected Landscape, which has been declared by all Southeast Asian nations as an ASEAN Heritage Park.

Additionally, the island province has numerous Important Cultural Treasures, such as the Old Mambajao Fountain – situated in the town’s rotonda, the Old Mambajao Municipal Building, the façade of the Santo Rosario Church in Sagay, and 14 heritage and ancestral houses. The sites were declared for “having exceptional cultural, artistic and historical significance to the Philippines.”