Accessible only by liveaboard, the Tubbataha Reefs were proclaimed as a National Marine Park in 1988 and inscribed as a UNESCO World Heritage site in 1993, in recognition of their outstanding universal value in terms of marine life species diversity and richness. These reefs consist of vertical walls or near drop off’s rising out of great depths where hammerheads, thresher sharks, and whale sharks can be seen.

Dive sites consist mainly of vertical walls or near drop offs rising out of great depths, with shallow reef tops teeming with local reef fish. The angelfish, butterflyfish, rainbow runners, Moorish idols, fusiliers, jacks, snappers, and sweetlips follow you around, while stingrays, marble rays, spiny lobsters and juvenile reef sharks are also common sightings in many places. There are several species of turtle known to inhabit the waters of this gigantic natural park; the most commonly sighted being green and hawksbill. Large trevally, tuna, and barracuda as well as grey reef sharks and white tip reef sharks can be spotted patrolling the reefs on the majority of the dive sites, whilst manta and eagle rays are occasional visitors. Groupers and wrasse flourish here and sightings of hammerheads and silver tip sharks have been amongst the large elasmobranchs spotted by guests of the Siren Fleet during our cruises. In addition to breath-taking dives, you will have the opportunity to visit the ranger station on the North Atoll to learn more about the marine protection of the area.

The following is a sample scenario of how the trip might be, this of course all depends on many factors like, weather, sea state, visibility, and what we have heard on the radio of what is to be seen.

We will leave the resort in Dauin and have a 2,5 hrs drive before embarkation at the pier in Sipalay around 15:00.

Once on board, we will get the boat and mandatory briefing from the Tubbataha Management Office and a check conducted by the coast guard before the boat is allowed to leave port. There is no diving on embarkation day and we will leave straight away cruising to the amazing reefs of Tubbataha. After sunset cruise and overnight sleep you wake up we will have arrived in the UNESCO heritage site of Tubbataha.

We wake up in one of the beautiful reefs of Tubbataha, here we will have a light breakfast and do our first morning check-out dive. After the first dive and our famous big breakfast, we relax a bit and get another dive in just before lunch.

We schedule up to 4 dives per day; 3 day dives and a sunset dive, typically as follows:

In accordance with Tubbataha Marine Park regulations, dive times are limited to a maximum of 60 minutes.

Two morning dives on bird island that’s also part of the Tubbataha National Park before M/Y Gypsy commences the 12-16 hour crossing back to Sipalay. If we have a smooth ride back we can make a stop for a sunset dive at Calusa island and continue our journey back to Sipalay.

A relaxing breakfast on board, disembarkation between 09:30 and 10:00 back to the resort in Dauin where you arrive on time for lunch and could do a dive or two in the afternoon or relax on a sunbed with a pina colada next to the pool.

This trip involves some long-distance travel on the open sea, whilst we attempt to ensure the number of planned dives is fulfilled, bad weather and sea conditions can affect the boat’s ability to reach a specific dive site in good time and may impact the number of dives that are possible. 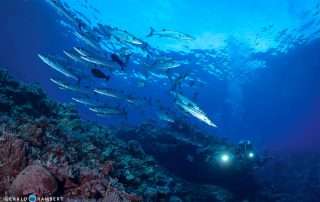 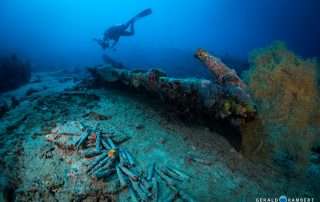 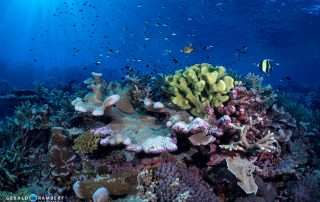 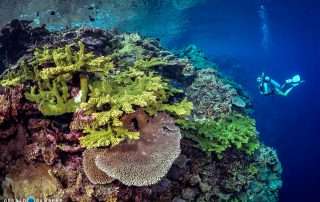 There is so much to explore at this dive site that we will often spend the whole day diving here. Schools of surgeonfish, rainbow runners, and sweetlips are a common sight. Whitetip and nurse sharks are found resting under huge table corals and scribbled filefish, boxfish and leaf fish add to the colour and spectacle of the stunning reefs; a great site for spotting spiny lobster too!

A wide variety of colourful reef fish form schools here; from big-eye jacks to tiny orange & purple anthias, all creating a welcoming atmosphere. Spot the tiny creatures including cowries wedge themselves amidst the leather and whip corals. It is a great site for turtles, and whale sharks have also been spotted here.

Adorned with stunning sea fans and colourful soft corals. This wall is super for wide-angle photography. Schools of bannerfish hover in the blue, turtles bumble along the wall and from the sandy bed garden eels and gobies emerge.

Many white tip reef sharks resting at the shallow plateau are typically seen here; hence the name Shark Airport. Dog tooth tuna, schools of trevally, marble rays, eagle rays, nurse sharks and batfish all add drama to the stunning reef. Turtles and moray eels are a common sight but divers should watch out for the triggerfish.

Golden, pinnate, and longfin spadefish all form schools along this fan encrusted wall, meanwhile clouds of purple anthias hover over the fields of staghorn corals in the shallow reef top. Also, this is a good site to spy turtles, snowflake morays, and spiny lobster.